Loving Flight Of The Conchords today.

Back soon with a writing-focused post.
Posted by Teresa Stenson at 5:46 pm 3 comments:

"exceptional writers from the North who want to write drama for television. If you have a strong individual voice, the ability to create great characters and tell compelling stories, and a real passion for television drama, you could take part in Northern Voices."

More of a scheme than a competition, the 4 selected writers will work on their craft with top Beeb writers and producers.

Free to enter
Selected pieces to be performed at their '5 Minute Festival'
The judges then select the best piece to be filmed by a trio of professionals.
Closes SEP 7th

I seem to be writing a lot of dialogue heavy stories at the moment, and it's making me wonder if I should have a go at writing a script. That might be a massively ignorent leap to make: I know there will be much more to scriptwriting and I'd be totally out of my depth if I ventured that way, but, you know, it could be good to try summat new.

At the start of July, I wrote about subbing to Flashquake, * an online journal who ask for stories of 1000 words or less.


You can opt to receive 'editorial comments' with your rejection, and, with my rejection email today, I got this feedback:

Thanks, Editor 2. I appreciate that (really, I’m not being sarcastic) but Editor 1 is right. And, in all honesty, I knew when I subbed that story that it wasn’t that hot. This isn’t me being all ‘yeah, I did it on purpose, wanted to be rejected,’ because, of course, that’s not true.

BUT, I knew, deep down, that I didn’t like that story much. It was a bit dull, and, thank you Editor 2, it was a little pat. I didn't really know what 'pat' meant before today. (It's just always been my Mum's name. And she's little.)

As I understand it, and what I think Ed 1 was getting at, my story being 'A little pat' means it’s a little shallow, surface, fake, and dishonest. That last word is the important one.

I wrote ‘With a name like that’ a few years ago, and I can’t even remember where the inspiration came from – which could mean that it didn’t – it might have been a response to a writing exercise, I really don’t know.

But I do know I don’t like it, it doesn’t feel real, or like I’ve written it. And it’s not because the main character is a 20-something bloke in 1994 who falls in love with a girl called Melody, because I’ve written things I feel better about which are totally out of my realm of experience: twins, child killers, obsessive voyeurs… but I got into the writing of those stories and something good came out, blended with the words and felt right. Felt honest.

It’s hard to really love what you write. And if you ever do, it might not last too long, because we evolve, hopefully get better, become interested in different ways of expressing ourselves.

For me, it’s too easy to trawl my ‘Completed work_unpublished’ folder and think it’s full of possibilities, just because the stuff is finished. I'm not sayin' I'll never sub anything old again - I mean often the older stuff has matured (or festered), been allowed to breathe, and I have had a few hits that way - by finding something surprising and seeing life in it.

And, it’s possible I might have liked ‘With a name like that’ when I wrote it a few years ago, but I didn’t when I sent it out last month – and that’s the crux of all this - I’m never subbing a story again which I don’t like, believe in, or find interesting. That doesn’t mean I'd believe the story is perfect, or that I wouldn’t listen to criticism, but it would be starting from a better place, an honest place.

So, I think I should include ‘With a name like that’ in this post, partly because I've been banging on about it for 500 words and also to really seal my new writing commandment: thou shalt only send out work you like, believe in, or find interesting.

It was music, it was Melody. Capital letter. Because that was her name.

She fell into my life like an almost-angel wearing a t-shirt with the words 'catch me' on it. I grew my hair for her, and picked up a guitar to pose in photographs she said made me look 'debonair'.

We were the couple who moved in together after 3 days. She was the girl who undressed as she walked from room to room. I was the boy who couldn't believe his luck.

She taught me how to argue because she loved to shout. Big, wild, accusations flew around the flat, thrown from her, batted back by me, until she made them too big for me to do anything other than fall under their weight.

I always said sorry. She would nod, in a small way.

The scarf was a gift for her from a stall in . , flimsy, and tasselled around the edges. She used it as a headscarf, a belt, a table cloth, a sarong.

Eventually she used it to wipe her arse with because we were out of toilet paper and I'd forgot to buy some the day before. She left it in the bath for me to find when I came home from work. It was all she left.

She knocked on the door the next day, and stood with her eyes closed.

That was an act worse than her using it as toilet paper, and it was the reason why she was leaving. She had already left, of course. I know that now.

(What if Editor 1 actually meant the narrator is ‘A little prat’?)

A good day. I've toyed with this idea about feeling like my writing is honest as I write it - but it's the first time it's hit home that it applies to subbing work too.

that zombie apocolypse I got involved in


I wrote a few posts ago about the experience I had on set filming the latest episode of the cult and popular (can it be both? - they did get a mention in Empire Online last month...) web series Zomblogalypse.


Well - episode 10 is now online, and if you want to see me doing my best interpretation of the directors' instructions:
'Tree, act like you're terrified. And maybe a bit weird'
(actually, they didn't ask me to be weird. I just was)
you can go to the official website or youtube for a goosey gander.


If you like it, watch all ten episodes (10 minutes-ish each) and then become a friend on Facebook.

I like that they ask not for stories with a beginning, middle and end, but say:

'Hint Fiction' is the name for such small wonders, and when they're done right, they really are wondeful (check out the previous winners for a flavour).

Closing date is end of August, and it's free to enter. You can send 2 pieces of Hint Fiction, or 3 - if you put a link to the website on your blog (like I just did), or your twitter thing if you do that twitter thing.

100-150 of the winning and commended stories will be published in an anthology.

I'm just about to email mine (an entire 22 days before the closing date. See, I may have learnt a lesson this week.).

After my dramatic trauma post earlier, I did the only thing I could under the circumstances. 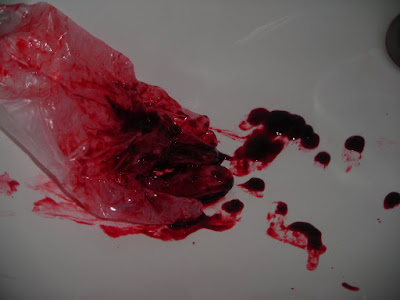 Took some time away from the story and dyed my hair* bright red.

I've decided not to contact the organisers of the competition to ask them if I can ammend my entry. It's against the rules, it could piss them off, and I don't want that.

Also, and importantly, on re-reading the whole thing as it is now, unexpectedly, it works. So I am letting it go away to do its thing.


*and most of myself, the bathroom, and several towels
Posted by Teresa Stenson at 9:13 pm 3 comments:

no no no no

no no no no no
are the words running through my head and out loud in this room (but with expletives in between) because, ****, it turns out that I have sent my story with a mistake - a paragraph which I copied and pasted to an earlier part of the story is also still in its original place, at the very end, meaning it appears twice.

I am so annoyed at myself.

It clearly states in the rules that entries cannot be altered after they've been submitted. I am so disappointed.

Should I send an email explaining what has happened?

I don't want to irritate the organiser by emailing, but I can't bear the thought of it being read how it is now, with that glaring error. It's so bloody unprofessional either way.
Posted by Teresa Stenson at 5:20 pm 6 comments:

But I did it - at 16.59 I hit the 'Yes' or 'Proceed' or the Whatever-it-was-called button (I was in a blind panic - they were strict enough to say entries received after 5pm would still be charged but not accepted! Like they have to say on TV phone-ins!).

And that is my story sent to the Manchester Fiction Prize.

And, might I add - I even unplugged the internet both today and yesterday to work on it.

Imagine what I could achieve if I did that more? I really should do that more.
Posted by Teresa Stenson at 5:03 pm No comments:

came my way. A result of the recession and my employers cutting staff costs, but a gift nonetheless...

I haven't been made redundant, but I was offered the afternoon off if I wanted it.

I battled with the idea for at least 10 minutes (the offer came by text message). Weighed up the pros and cons and my own financial situation and realised a loss of 4 hours work wasn't too big a dent.

And anyway! (said the big idea in my head) You can work on your story for the Manchester Fiction Prize! (Of which the first prize is a staggering £15,000. Which, if I won, is ever-so-slightly more than my earnings for 4 hours at work).


So I've spent all afternoon at my desk doing just that. But it's slow. I'm slow.

And I think I've read too much good fiction lately - I'm getting that feeling where everything you write just looks basic and lacking and by numbers.

Deadline is Friday 5pm. I'm working tomorrow (even if you get the offer to have another day off, there are still bills to paid, Teresa) so I need to push through this self doubt. Just get a draft done.

Get it written, love. Come on.
Posted by Teresa Stenson at 6:48 pm 2 comments: