Something new and a list of 'to dos' (worse blog title ever?) 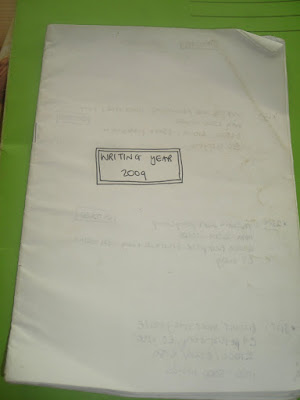 
This dog-eared A5 booklet is my 'Writing Year 2009' diary. I don't seem to manage too well with actual-bought-from-the-shop diaries, so I started making my own in 2007, with a page for each month to record short story deadlines, and a section at the back for 'submissions' made. 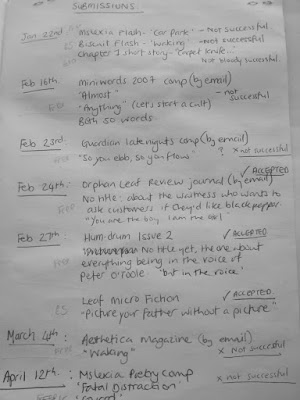 Here's the 'Submissions' page
from first few months of 2007: 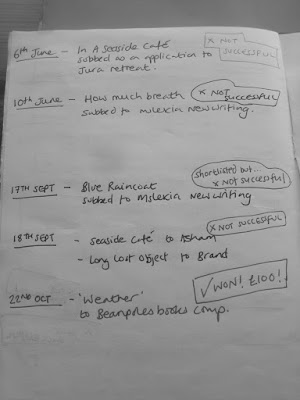 Now, the whole of 2009 (well, so far) and my submissions page looks like this: 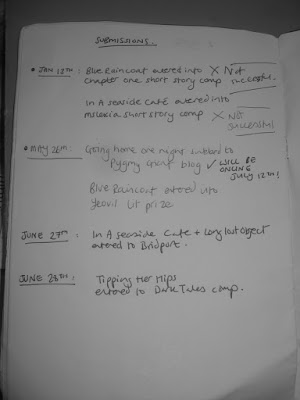 There are a few reasons I haven't been as active with submitting work, the main one is that I don't have as much new work to submit. I mentionned my alter-ego in Blog 1. When I'm writing in that character, she can take over a bit. She's been quite prolific in the gaps, and has been published in one or two places herself.

I'm not being deliberately evasive about the alter-ego stuff, I'm not trying to conjure up a mood of expectancy, I'm still working out whether I should tie us in together - me and her, that is - I believe she's very obviously not real when you read her, but I'm not sure whether she's better standing on her own, without being tied to me.


The thing I started this blog about though, the reason part of its title is 'Something new' is because aside from the more obvious target of the Bridport Prize, I sent a story here just now: darktales and it's not at all my usual target.

But I have a few stories I've written around a theme for a specific publication/competition which were not placed, and the story I just subbed to Dark Tales is one of them.

I wrote 'Tipping Her Hips' a few years ago as an alternative/updated 'Snow White' story for Mslexia. It isn't my usual style, and it felt like a challenge to write. I researched fairy tales and the Snow White story. I read 'Snow, Glass, Apples' by Neil Gaiman and wished I could write something nearly as good.

I've been rejected by Mslexia many times and see being published in there as a big writing goal. It's an excellent magazine.

'Tipping Her Hips' wasn't right for Mslexia, but it might have a place somewhere else. Whether or not Dark Tales is that place, I'm pleased to have sent it somewhere - it's a good feeling having work out there, being considered.


Are the places you sub to wide and varying?

Do you try to always have things out there, being judged?

I have just entered two stories into the Bridport Prize, both of which are 'old'.

Writing something new just wasn't happening this week, even though I've been playing around with a particular story idea for a month or so.

I'm not sure exactly why I didn't get my act together and write it, but I reckon it could be one, if not all, of the following:

- I've been working more late shifts at work, making me less energetic in the morning (my best writing time)

- I'm pretty intrigued by this blogging thing now: keen to read around other writer's blogs, feeling my way with this one.

- I might have got overawed by this year's Bridport judge... (see previous blog)


I guess that last point could come under an umbrella term: 'Pressure'. I've had various conversations with the creative people I know about this feeling of pressure we put on ourselves, to produce and try new things, to get up in a morning and go out and write/paint/film. To push ourselves when we need to. And for the writers: to actually write.

And (perhaps not in the strictest sense) could the opposite of 'Pressure' be 'Acceptance'? Accepting when we need to stop, to let an idea 'stew'. And it's not just the idea that might need a break, but the writer/painter/filmmaker too.

Does it matter what kind of 'rest' you take? And how long?

And, here's the tough one (for me at least): how do you know you actually need to leave an idea/project? How do you know you're not just lacking confidence, or worse, being lazy?
Posted by Teresa Stenson at 3:00 pm 4 comments:

So here I am trying to write a short story to enter into the Bridport Prize (one of the biggest lit prizes of the year, in money and prestige), finding that the main reason I'm entering is also the thing that's holding me back:

It's being judged by one of my biggest inspirations, Ali Smith.

I first encountered (rather than read) Ali Smith at York Lesbian Arts Festival in 2006. It turns out you don't have to be a lesbian to attend, but you do have to be a woman - unless you apply in writing to the organisers. Seems a little discriminatory in this world? There was such a wealth of good literary stuff happening that day it's a shame not everyone could have the chance to be there.

Anyway, I digress. (And I hear you shouldn't do that in blogs.)

Ali read aloud in to a full audience in a large room at the end of a day in which most of us had spent 'listening' - to stories, debates, poems, ideas. I find listening tricky in that set up, and I remember having to focus myself a lot to follow what most writers were saying at the various events I attended, especially when it came to hearing stories read aloud. (I'm not sure that it's the best forum for sharing stories, it's all quite formal - the writer with a mic on stage, the audience in rows below them.)

But I remember Ali Smith reading from her short story, Writ and the way her energy - or the energy of her words - were speaking to me in a way no other spoken word had reached me that day, or any day before. I followed the story, understood it, was excited by it.

I bought The Accidental, Ali's Whitbread-winning novel, a few weeks later and that feeling of energy came through her written words too.

It seems a little primitive to say that now, like I'm aware how many writers do that and have been doing that for years.

But it was Ali Smith who showed me how to do it, or at least opened my eyes to it.

I actually wrote a review of The Accidental for Writing Magazine published in Feb 2007, and it reads a bit like a love letter to Ali Smith.

So now she's judging this year's Bridport Prize, like I said - it's a biggie. I've entered before and never been placed or shortlisted - they get thousands of entries, real professional writers enter too, and the word limit goes up to 5000 words (my stories hardly ever get above 1500) and usually serious epic stories win it, but -

-Ali Smith is judging it and she taught me it's okay to try something different.


Oh. But the thing is, the deadline is less than a week away and I haven't written the thing yet.
Posted by Teresa Stenson at 3:41 pm No comments:

This is the first one

But I'm not sure what it will be just yet.

I'm a short story writer with leanings towards energetic and experimental prose. I've been published in a few literary journals and anthologies.

I've been blogging with my alter-ego for about a year, so this feels a bit unusual, being 'myself'.

My alter-ego is ofen more productive than me.

(About this alter-ego - she's a work of comedy fiction, but she is a side of me. She's a writer too, one who knows no boundaries.)


It feels sometimes as if I have two sides. The alter ego: unaware, full of enthisiasm and word count; and then the other, 'real' me: struggling between a flurry of words and the halts.


I will introduce the alter ego later, I think. I'm still feeling my way, being hestitant with this blogging world.
Posted by Teresa Stenson at 5:49 pm No comments: