I see a ping-pong ball fall from the sky. It falls from the sky and bounces, springs and ping-pongs down the high street. Comes to a stop in the gutter.

By the side of that gutter is a woman, oblivious to the falling ball she’s marching up and down on the spot, attention on her grandson toddling his way towards her. She wraps him up in their reunion, swizzes and swirls him around, and when she lets him down again he’s dizzy, he falls over, lands on his hands right in front of the ball.

There’s a moment, him eying the ball up, I think he might reach out for it. But he’s grazed his palms and he needs to hold them up for inspection, for verification that he can cry. He is scooped up, petted into his push chair and pushed away from the ball.

The ball rests a while. Even I don’t give it any attention. But when I do, when I look out at it again, it is at the exact same time that a lady, an older one in a bright green coat and with long black hair falling about her face, stoops down and picks the ball up. I watch her walk down the street with it, her face mischievous like she's won a secret prize, the ping-pong in her palm.

I mentioned the other week I was working on a monologue to send to a Ten Four Theatre. So I did that.

The process was closer to adapting something rather than writing a brand new thing, in that I took a short story (of my own) and reworked it as a monologue. It was a new experience, given that I've never written for theatre before, let alone sent something out to be considered.

So I don't know if anything will come of it beyond this. But the adapting process was useful in giving a little new bit of life and a stronger voice to an old story, one that has been sent to various places and rejected - as many stories are - though I don't want to give up on this one. If it isn't right for the stage, I'll try it somewhere else as prose again. It's what we do, innit, write stuff, try to get it read. Or heard.

Speaking of stories being heard - howzabout this - I'm not sure if I'll enter it myself but it looks pretty neat. It's a competition for audio stories of 60 seconds and the 1st prize is 60 quid. It's from 4' 33" and their website is here. You don't even need to have special abilities to make audio files, you can skype it to them or even call and leave it on their answerphone.

Other places to send your work to - the prestigious and coveted BBC National Short Story Award has gone global for the Olympic year - it is now INTERnational. It closes on Feb 27th and does require a track record in publishing. Check the guidelines and see if you're eligible. Also, if you plan on entering, give yourself plenty of time to fill in the entry form and check, double check, all the rules as they're quite extensive. But worth all the diligence if you were to be placed in this competition - awesome exposure and a first prize of £15,000.

And the Grace Dieu Writers' Circle have competitions for both short stories and poems with 1st prizes of £500 in each category. The closing date is Feb 28th. *Note that this is a postal entry only competition* (darn it, my printer's broken)

She asks, “Do you know why you’re here?” and I go for dumb rather than philosophy and reply, “No”.

Clearing her throat, she looks to the file and reads: “Yesterday afternoon at 2pm, you, Teresa Stenson, asked myself, Valerie Brown, your team leader, for permission to leave your shift at 5.15pm – which is 15 minutes earlier than your scheduled finish time of 5.30pm. The reason cited was that your Mother was in hospital and you wanted to catch an earlier bus in order to make visiting hours. Correct?”

“I, Valerie Brown, agreed to this on the condition that at 5.15pm the level of incoming calls were either Low or Moderately Low – and certainly not Moderate or Critical, and you, Teresa Stenson verbally agreed to this condition.”

“At 5.20pm yesterday afternoon I returned from my break to see firstly that you had vacated your work station for the day, and secondly that call levels were at Moderate – evidence of which I have here in a printed Call Volume Report. When this document is cross referenced with your movements as tracked by your electronic swipe card, and supported by several eye-witness accounts from your colleagues, it is clear that you switched your headset to ‘Unavailable’, logged out and swiped out of this building 5.15pm during a period of Moderate call levels. I have no choice but to give you a formal warning.”

Okay, so, my Mother wasn’t in hospital, but that is so not the point.

Ever been told off for a ridiculous reason? Do share.

I just wanted to tell you about this Art House Co-op project which has just gone from being a pay-to-participate thing to a FREE thing.

Remember last year I took part in their Fiction Project? (you can read about that process here, or click up there somewhere on the 'Oh hey so I love you...' tab)

Well it's a similar sorta thing in that your piece of writing will be exhibited alongside all the other participants' work at Brooklyn Art Library. I love the inclusiveness of this kind of project, it's not sending your work to an editor who will think about it and say 'yes' or 'no' - it's lots of people coming together and all their parts making something.

Here's what this project is about:

What would you say to your childhood home?

It's been awhile, and the house you grew up in is starting to wonder about you... If your childhood home could hear you, what would you say? It might have been an apartment in the big city, a farmhouse in the country, or a cabin in the woods — there's a place from your past that will stay with you forever. Letters to Home is a community art project that asks creative people like you to write a letter to your childhood home. Share an epic backyard adventure, ask a lingering question, or reveal a long-kept secret — we'll transform our storefront exhibition space into a mailbox from the past. Every letter will be added to the Digital Library and archived in a boxed anthology that will join us on the 2012 Sketchbook Project Tour.

Go here to sign up - there are limited places - just 500 - I was something like the 200th person about 30 minutes ago - a further 60 people have signed up since then.

Let me know if you do this!

My weekend with writers was great. Fun, easygoing. We stayed in a great house, shared some work, cooked and ate, played. I was coming down with something and didn't sleep very well; they were the only downsides. And that one of our number has fallen in love and will most likely sail away to America quite soon, so it might have been the last time, for a while at least, the 6 of us would have a weekend quite like that. We will adjust and move and add-in.


This week I've been adapting a short story into a monologue to send here. It's the first time I've seriously attempted writing for the theatre (oh, apart from that degree I did which had 'theatre' in the title) so I'm not sure how it will go, but it's been interesting imagining the work being used in a totally different way. It was quite a monolog-y story as it was, so it's felt like a fairly natural process. I saw the call for submission on the BBC Writersroom site, and thought I'd give it a go. Also was a good reminder that the Writersroom is a good resource.


And I've been thinking about time, and the way we attach ourselves to pieces of it. 'This time last week I was...' and so on. If it's 5pm now, on Saturday, I feel more connected to 5pm last Saturday, closer to that than 4pm today. Just thoughts, that's all, and I'm reading The Power Of Now, so time, or not-time, or time-doesn't-exist, are all ideas running around that I'm taking on.

To finish, here we are outside our rented house in the Yorkshire Dales. I'd just set the timer off on my camera and ran across the road and fallen onto Gavin before this was taken. Good times. 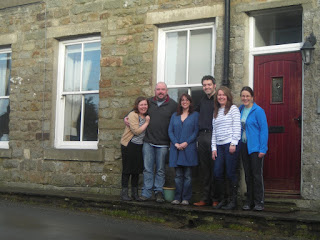 so it's really true

...that if you have something to do, some task or another, you should ask a busy person to do it.

I've had a hectic week with work - both day jobs, and visitors, and work, but have ended up writing more than I do in a less full-on week. I had a deadline because I had to have 2 pieces of work written to take with me on a writing weekend (heading off later today), and 4 or 5 days ago I really didn't have 2 pieces that were ready to be seen.

But a cunning use of any spare minute and a nice bout of insomnia one night and a little bit of pressure has seen me through and I have my 2 pieces - one short story, and, what might be the first chapter of a novel I've been thinking about thinking about writing for a while.

So, later on I'll be away to the Dales with my writing group (includes this fella) for 3 days. We'll do review sessions for the work we take along, and we'll do a few writing exercises, and we'll talk a lot. It's a sociable trip, and a welcome chance to communicate face-to-face with people I mostly talk to via my keyboard.

Have a great weekend whatever you're doing.
Posted by Teresa Stenson at 5:28 pm 2 comments: