A few months ago Dan Purdue alerted me to this call to write a handwritten letter for a new journal, The Letter's Page, edited by Jon McGregor. Ooh, I said, that sounds right up my street.

Some reasons: I like making marks on a page, real pages. Especially with a biro, I'm okay without a fancy pen. I also like a little bit of autobiography, something from myself onto a page to someone else. That's what I loved about the Art House Co-op's Fiction Project (you can read about my experience with that here). I like making a real-life thing.

The Letter's Page theme for Issue 2 was 'pen pals'. Well, I've had a few of those. I got a bit obsessed by them in my teens, answering ads all over the place. At first - Smash Hits and (specialist) Take That fan magazines. Then later - a music magazine - I forget the name of it, it was monthly, with 'classifieds' in the back. I'd scan them looking for  mentions of bands I liked. Then I'd write to their PO Box and hope for the best. Most didn't reply.

I remember a girl who did, the same age as me (15). She wrote dark poetry (I did too, well - I dabbled) and she decorated her letters with glitter and pen drawings and told me how her and her friends would just go to the train station and catch a train anywhere. Just to, y'know, see where the day would take them. Oh my word I thought she was so cool. I wanted her to come and stay with us in the summer holidays. She didn't. I can't remember when/how we stopped writing. Maybe she was weirded out by my suggestion she come and stay at my house. I'd always wanted a sister. That's my excuse.

Before then, another girl. I was 13, she was older - 17ish. She was one I picked up from the (specialist) Take That fan magazine. She'd write really long letters, all about Take That. At some point she must have asked for my phone number because then she'd call me too, from a phone box, and we'd talk after school, maybe just once a month, but always all about Take That. Again, I'm not sure why we stopped writing / chatting. Maybe it was when I made the transition from being Take That's number one fan to Nirvana's. It was like I just flipped, changed, overnight. Hm, yeah, that is how it happened, and for totally superficial reasons. But she was nice. I wonder what happened to her.

And somewhere between 13 and 15 there was a man - who I hadn't expected to be a man when I replied to his classified in that music magazine. He was supposed to be my age, but he said the magazine had misprinted his ad, and actually he was 26. But he seemed ok, and he liked the bands I liked, so I wrote back. Then within a letter or two he was asking me very personal questions, and instead of just not writing back I wrote back and tried to avoid the questions by answering 'quirkily'. I see through it all now. Wish I had then.

And there were the letters I'd get from friends who I saw everyday at school. And my cousin, who I also saw everyday. We even had our own code to disguise the very secret things we must have been writing. These letters were not sent through the post but passed to each other at the start of the school day. And if you fell out with your friends, or they fell out with you, feelings were best articulated by a long and dramatic letter.

But my Letter's Page submission isn't about any of these pen pal experiences. It's about my very first pen pal, kind of, when I was 8, in 1989, when I behaved like a weirdo for a bit. That's all I'll say, because I might be lucky enough to have my letter selected for publication. If it isn't, I'll post the letter here. ('post')


Here's the link where you can find Issue One of The Letter's Page. It's available to read as a PDF, and has some great pieces of letter writing. I was particularly moved by the one from Kathryn Kuitenbrouwer.

Things Found and Made - by Mario Gregoriou

Witness the rejection of hierarchies!
Smell the equality of expression!
Taste the freedom to question! 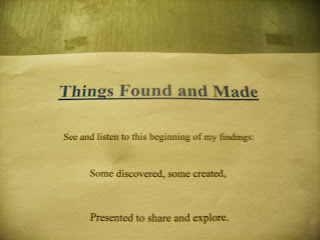 If you go there, you will find:

If you go there, you will hear (from the speakers above you):

the music of Dunmada - songs and sounds from industrial rooftops, vocals that fly

If you go there, you will sit before a TV/DVD combi, and it will play:

If you cannot go there, you can look at these photos 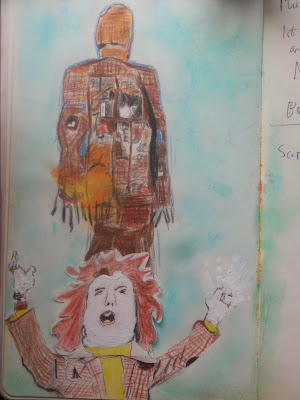 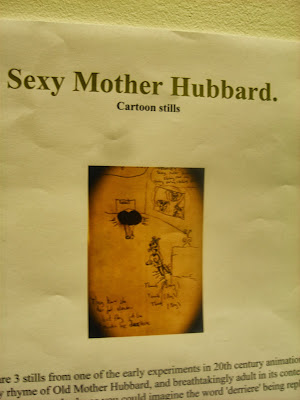 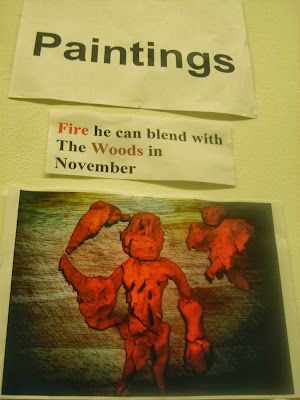 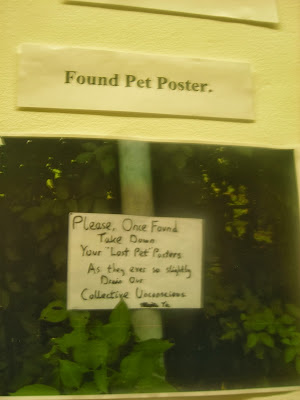 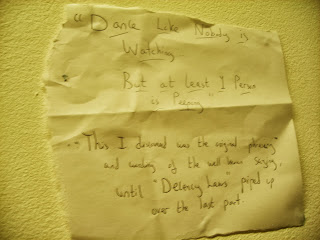 and you can have a go on this footage

that (sexy) Mother Hubbard singin' with dogs at dinnertime


that duet with Kings of Leon and the Medulla Oblongata

For more information:
Click here to see the online version of Things Found and Made
Click here to listen to the sounds of Dunmada

And finally
here we have the artist on the right, and this writer on the left 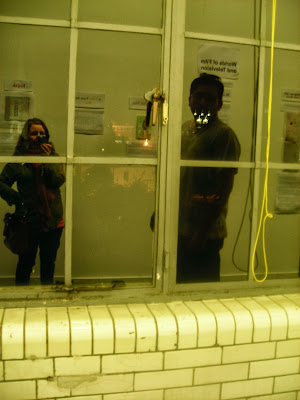 Posted by Teresa Stenson at 7:54 pm No comments: