In November, Fairlight Books published my short story Things I Have Learnt About Jason Donovan on their website. This was a real Woop!Moment for me (pretty sure that's a thing) but especially so because I've been trying to get this particular story 'out there' for years, never sure if one of the reasons that editors / competition readers and judges were rejecting it was down to the fact it's about a real-life-still-living famous person. I did a bit of asking around for other writers' advice on this, but it was a grey area and hard to get clarity on it.

So when Fairlight Books said they wanted to publish the story but would need to consult a lawyer first in case it was libellous I was really interested and excited - and also it made me feel a bit glamorous that a lawyer was being consulted on my account (I'm very easily glammed). The verdict was that although there was one line about Kylie which could be libellous, the rest of the story was not. I reworked that line and at last - seven years after writing it - Jason Donovan was released into the wild. Of all the stories I've had published online I would probably say this is the one that has connected with people the most, which was so satisfying after all this time. Click here to read. 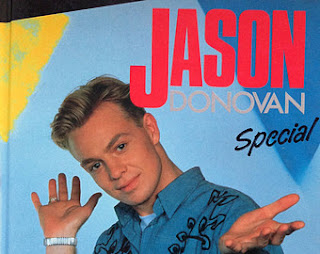 And then... Matchbook literary magazine helped me get 2018 off to a really great start by publishing a piece of flash fiction, The Route, on Jan 1st. This is a super magazine run with a lot of love and it was a real delight to be selected and appear there.

Again, this story lead to some really nice feedback and connections with writers I hadn't 'met' before - mostly on Twitter. I love that about Twitter, and I like the longer discussions and threads that are part of the experience there now. This week I asked my fellow published short story writers what advice they would give to those just starting to send their work out, and the response was amazing. I had a great day dipping in and out of the chat. I'm @TeresaStenson on Twitter if you'd like to take a look. 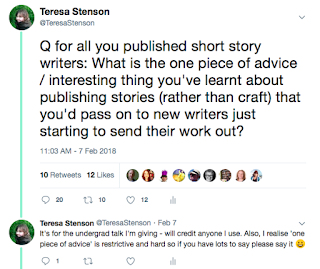 And then... just yesterday I got the awesome news that I've reached the longlist in the Bare Fiction Short Story Prize. This means I'm down to the final 50 stories out of the 548 they received, so I'm very excited and happy about that. Judging is taking place through February and winners will be announced early March.

And in between those lovely nuggets, I've been flat-out busy with the ghostwriting projects I have on at the moment. I'm not sure how much I've spoken here about my work as a ghostwriter - it's a tricky one because I often have to sign non-disclosures so I'm limited in what I can say, but I can tell you that I love doing this work.

I have a couple of books on the go at the moment for very different clients, including someone who is well-known but... yeah I can't say anymore - sorry to be that annoying person.

So what can I say? I can say it's so interesting to write as someone else, and when I get into the zone and into their head, it's really thrilling and the words just flow.

I can say that putting a client's book together is like solving a huge puzzle, but I guess that is like writing a book of your own too. Plate spinning a-go-go.

There's actually so much more I could say, about ghostwriting in general, and I probably will do soon because it's such fertile ground. And I'm in the process of formulating my thoughts and findings and experiences as a ghostwriter because...

A really lovely thing happened at the end of last year: I've been invited to give a guest lecture at my old university about my life as a working and practising writer. Initially the idea was to give one talk about everything: short stories, ghostwriting, and anything else in between, but that's now evolved into two separate talks - so I'll talk about fiction in one session then a few weeks later I'll visit again and talk about my work as ghostwriter. I'll also run a couple of workshops after the lectures, which I'm really excited to do.

Oh and... when not writing, walking, talking, sleeping, tv-ing etc... I'm reading this book and drinking from this mug. 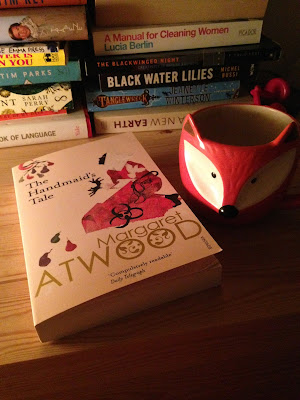