There's been a lot of catching up lately.

Family visiting us, friends who live far away stopping by.

Then my best friend, Claire, got married just this weekend (she's been preparing since she was 4 years old; the rest of us since Andrew proposed back in Feb 2013). It was a lovely day. Romantic, fun, exhausting, happy. Here we are.

A few days later I attended a funeral. My Aunt Audrey, who was my Dad's sister, died last week. She was the youngest of three. My Dad and his other sister, my Aunt Edith, have already passed. So Audrey was the last of those Stenson children, and in that way the last close link to my Dad. But I'd only seen her occasionally over the last ten years or so, and usually at other funerals unfortunately. Isn't that the way? You see people at funerals and vow to meet again soon at a less sad occasion. We didn't manage to.

My Dad died when I was 16. When I was just getting to know him, or appreciate him. The last time I saw him we were talking about music I think (we didn't have the same taste then, but there'd be some cross-over now) and he told me he was a mod in the 1960s. This was possibly the most exciting thing I had ever heard. He then went upstairs and rooted around his wardrobe, coming back down with a mint and cream paisley shirt he'd worn in the 70s. It was 1997 and I was all about flares and collared shirts and long beads and anything alternative - earning me two nicknames at school: 'Indie Girl' from the cool 6th-formers in the years above me, and 'Sweaty Betty' from the townies in my year group. I WAS Indie Girl. And after that I was extra-original-authentic Indie Girl with my mint and cream paisley shirt.


It always felt weird for me around my Aunts and my Grandma after Dad died. Because I knew I was their last link to him, and it made me feel uncomfortable, and odd, and scared in a way. I'm not sure why. Pressure, maybe. No one did anything wrong, just the circumstances. Just the way it felt back then. Overwhelming.

There are just a few Stensons I know now, pretty much just Edith and Audrey's children, my older cousins. But I can count on one hand how many times I've seen them in the past ten years. Despite this I feel a sense of unity of when I do, and I hang on to them a little tighter when we hug, maybe because - it's back to links - they are my only physical link to Dad, their Uncle.

At the funeral I got to meet one of my Dad's younger cousins for the first time and I asked him for any stories, any memories of Dad from when he was younger. He remembered my Dad being tall with a deep and booming voice. It was enough to bring a little physicality to memories that can become still over time. 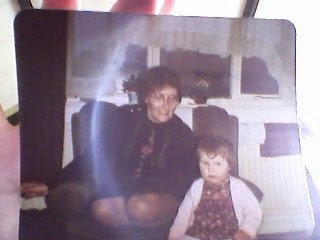 And here's my Dad, in the South of France with his girlfriend (not my Mum) sometime in the late 50s, or early 60s. He's around the age he was when his cousin remembered him as tall, with a deep booming voice. (Perfect for singing Elvis covers, which he did when I was a teenager, in a band with his friends. Sooo embarrassing, I thought. Not now.) 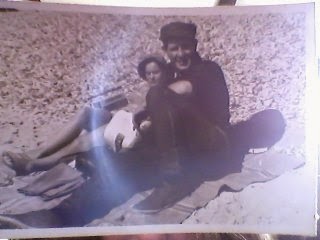 Friends, a wedding, families and memories. A week of connections, really.

Posted by Teresa Stenson at 4:29 pm

Having a large family and circle of friends is a double edged sword; it means lots of happy occasions but also more people who pass away. I try to make an effort to build memories and celebrate every event.

The wedding photograph is so beautiful - all of you looking gorgeous.

I loved reading about your dad and that shirt - fantastic.

Actually, I loved reading all of this post. Even got a bit teary, but I'm a daft old bag.

Thanks for sharing this.

Hi L - yes, that's the way I guess. It's good that you acknowledge those happy moments, a good reminder. Thank you for stopping by.

Hi Karen - ah, thanks. It's always a bit odd when you share something personal on a blog so I'm pleased you liked it and that it made you cry. Well, you know.