when you're at your computer, supposed to be writing, but you just think you might as well just check your emails very quickly, so you do, and it turns out you haven't had any emails in the 20 minutes since you last checked so you think you should probably just go on facebook to see if anything has happened to one of your not-even-a-friend-just-someone-you-went-to-school-with-15-years-ago-friends and their status updates like "gonna get rite pissed tonite lol bring it on" and now you're on you might as well read everyone's status updates anyway and all the comments from other people you don't know have never met will never meet then after an impossible to measure amount of time something inside you clicks and you feel a bit like a spy and a lot dirty for foraging around other people's lives so you get out of there asap and check your email again then maybe bbc news just in case something massive has happened in the world and while you're there you might as well check the 'entertainment' news and maybe make yourself feel a bit better by clicking on 'arts and culture' til you realise you've never actually heard of anything in that section really so you check your emails again and think 'that's enough now, internet! Leave me alone: I must write.' (a blog post)
Posted by Teresa Stenson at 12:50 pm 11 comments:

til the deadline of the 100 Stories for Haiti Project - send a short story of up to 1000 words, with 'hope' at its centre. 100 will be selected for publication, profits to be donated to the Haiti disaster fund. See here for full details.


I felt a little surprised when I looked over my 'completed but unpublished' folder - I can't really say that 'hope' features in any of the stories I've written. Which is odd because I don't consider myself to write about people or situations that are, erm, without hope. Maybe it's just because it's clearly stated in the guidelines, though obvious why, it's still an unusual thing to look for in your writing. Or just something I personally haven't thought about being or not being in my work.

I reworked a very short story that felt as close to the brief as I could get without feeling too unlike me. I'm not sure it's what they're looking for but I'm glad to have subbed the first piece of work I've subbed in a while there.

Good luck to anyone else entering.
Posted by Teresa Stenson at 6:21 pm 4 comments:

Tell me how you write - Part 2 - Nik Perring

Here's the next installment in the 'Tell me how you write' series of guest blogs. This time we're learning a little about Nik Perring's methods, his appreciation for a blank page and tendency towards ink the colour of dried blood - 'but prettier'. 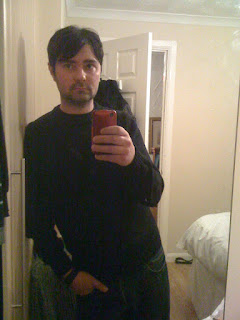 What do I write with? For the past few years it’s been a fountain pen for first drafts. A Pelikan. A black one with a gold nib at the moment and for the foreseeable. With brown ink inside it. Well, I say brown, it’s actually exactly not far from the colour of dried blood, but a bit prettier.

I used to have this idea that I’d use different pens and inks and things for different stories and characters and things. But that didn’t work because, mostly, I don’t have a clue who a story’s about or what’s going to happen before the story’s done (and changing ink colour can be a bugger – I think I’m a bit OCD about that: it CAN’T BE MIXED!) so now I use my one pen, with the ink I like. And, so far, that’s worked great. 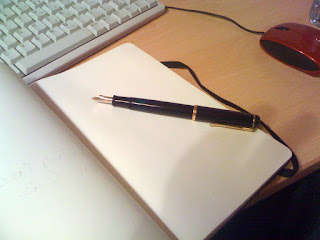 Everything I write first draft (fiction, that is – this is being written straight onto a computer, as are blog posts and other such bits) goes into a Moleskine notebook. It can be a red or a black one but it has to have blank pages. Lined just won’t do. You see, I have to take over the page and I need nothing there before I start – blank canvas and all that. Plus, my writing’s far too messy to fit between lines.

And the Moleskine’s not a posing thing (neither is the pen, for that matter, they’re both tools, albeit pretty ones). It’s not there to make me look like a writer. I use them because they’re good, reliable and sturdy and because I know that the pages can handle ink.

I like how holding a pen feels. When it’s not being physically put to paper – when I’m thinking, it gives me something to fiddle with, to twiddle or to tap. When I am writing I don’t feel it – and I think that’s absolutely important because the less resistance between brain and paper there is the better. That means there are less things getting in the way.

But the pen and the notebooks are only for first drafts. Then they get typed up. I use a laptop which is on a cradle and a separate Cherry keyboard so my back doesn’t suffer any more than it needs to. And I think the typing up’s the most enjoyable part of the process – well I think it is for short fiction – because that’s where things change. I’m rarely satisfied with a first draft. I’ll know there’s work to do on it to make it okay or, sometimes, good. And it’s the space between the messy first draft and the Official Document where that change occurs – I edit and tweak a huge amount as I’m typing up – it’s as though, suddenly, it’s become a lot clearer. It’s that space that allows a story to grow. 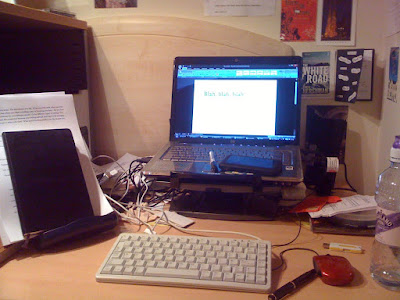 Your last two questions are really difficult to answer. [tell me about when then connection between your writing self and your hand is strongest - what do you use to write with then? what satisfies you, the deepest you, the most?] The writing that satisfies me the most, I think, is good writing. And that’s not something I can see (because it’s not bloody there!!) while I’m writing, it’s something I can only see, if I’m lucky and if it is there, once I’ve finished. So that part’s actually properly detached from the creating part of things.

And I think that when the connection between my writing self and my hand is the strongest actually has more to do with my brain and chance than it does with my pen; that’s the part I mentioned before, the part when I don’t feel the pen, when things are just happening, when I’ve caught the wind. Must admit, I wish I’d catch the wind a little more often than I do!

Nik Perring is a short story writer, author and workshop leader. His short stories have been widely published in places including Smokelong Quarterly, 3 :AM, Ballista, Metazen, Espresso Fiction and Word Riot. He blogs here and his website's here. 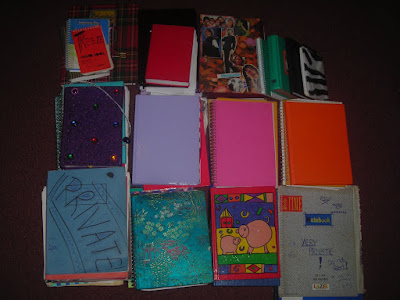 I kept a diary from the age of 11 right through my teens and into my early 20s. They had been stored at Mum's, and now they are here in my living room, providing me with endless hours of entertainment, laughter, shame, and occasional sadness.

You can't quite tell from the photo but there are about 70 altogether. Most were written when I was between 12 and 18/19.

I'm rediscovering experiences I'd forgotten, some things I should have just never recorded, and revisiting people and times I don't know anymore.

I'm quite a nostalgic person, I like looking back, and it's amazing how certain parts of my teenage life still feel very part of me, and very close.