A slight deviation this week.
These photos aren't from a diary, they're from what was originally my RE exercise book when I was 12 (in 1993). 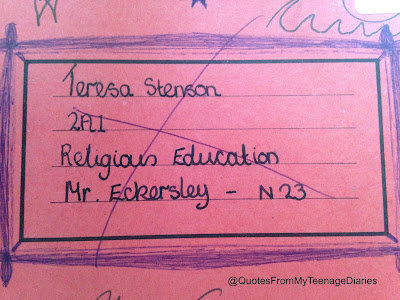 The book was only half-full, so sometime in 1997 I repurposed it, along with a few other books from school, and used the blank pages to draft out poems, stories and letters to my penpals. So in that way these books transitioned into something more personal and diary-esque. When we get to the 1997 years I promise I will share those excruciating poems, stories and letters. 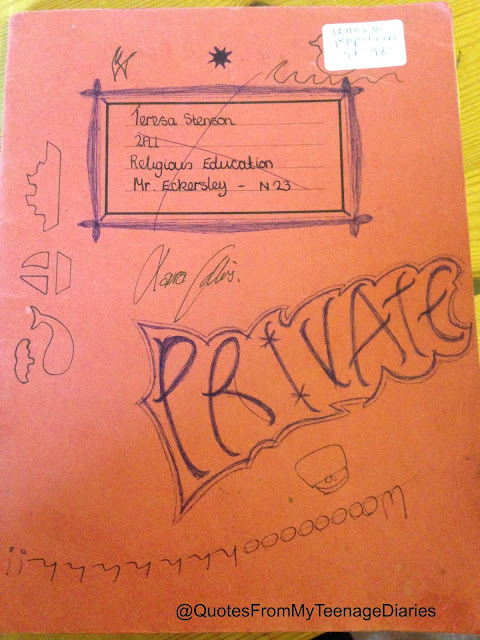 But for now we're back in 1993, in Room N23 of my secondary school where Mr Eckersley - who I remember being the strictest teacher in the school - has us sitting in alphabetical order (boys on one side of the room, girls on the other) while he dictates information about the world's religions. My handwriting is lovely and I write in great and fluid detail about the life of Jesus, John the Baptist, the feeding of the 5000, the parable of the good samaritan...

It's so good in fact that I'm sure we must have just written what Mr Eckersley told us to write, because there are hardly any awkward sentences, questions, or areas where I didn't quite get it and the teachings.

Apart from this one, perhaps:

I find this a little puzzling - why would I list Kenny Rogers as a modern day example of someone with too much money???

I think there are one or two instances of rebellion in the drawings - though they are very, very mild. I think the 'Jesus Heals' drawing has a little of my humour in it, partly because the man is wearing a string vest and I used to think they were hilarious, and also because it's quite abrupt and that gives it an air of disbelief. 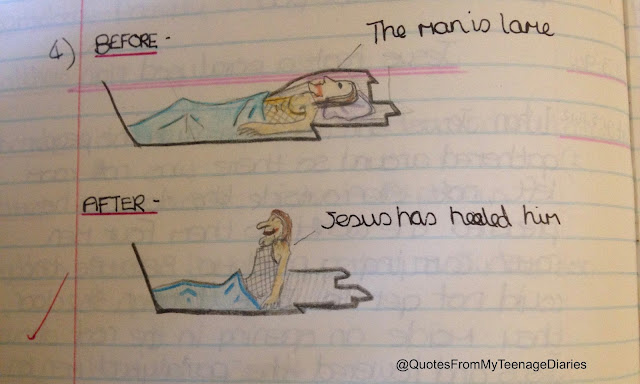 It's quite clear I had fun with the 'The Resurrection of Jesus: In Pictures' but not enough to get caught, or told off - which was pretty much how I spent the rest of my education - just on the right side of cheeky. 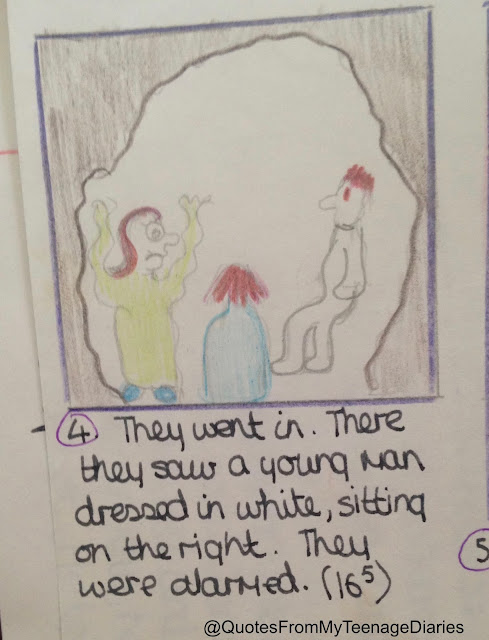 Quotes From My Teenage Diaries is an ongoing project as I re-read and reflect
on the diaries I kept from the age of 11 to 16.

There's a Facebook page too and soon - I hope - there will be a podcast.
If you enjoyed this or can relate in any way - please do leave a comment or say hi on Facebook -
it'd be lovely to hear from you.

Posted by Teresa Stenson at 5:05 pm

Thanks for sharing your info. I really appreciate your efforts and I will be waiting for your further write ups thanks once again.
Diary 2019 online

Thanks for sharing your info. I really appreciate your efforts and I will be waiting for your further write ups thanks once again.
Diary 2019 online